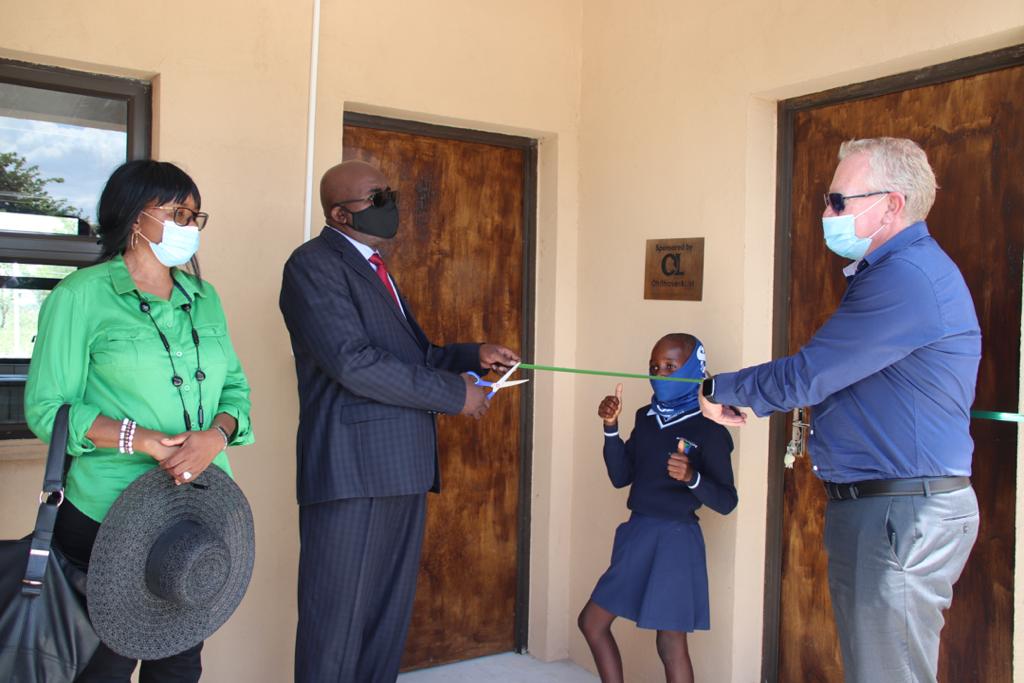 As part of its ongoing commitment to supporting education in Namibia, the Ohlthaver & List (O&L) Group unveiled the newly constructed Oshinamumwe Early Childhood Development Centre just outside of Omuthiya, on Wednesday, 10 March The near N$900 000 investment made by the Group went towards the building of two classrooms, an office building with a storeroom, as well as a kitchen. The classrooms were also furnished with 60 school benches built by O&L subsidiary, Kraatz Marine. With the addition of 36 newly registered young learners, the kindergarten will accommodate a total of 48 learners.

In keeping with COVID-19 regulations, the official opening of the kindergarten was attended by a small group of people, including the Oshinamumwe Combined School’s Principal, Toivo Mupupa; Oshikoto Regional Education Director, Aletta Eises; Oshikoto Regional Governor, Hon. Penda Ya Ndakolo; Patron of the Oshinamumwe Combined School, Klaus Schade, and O&L Group Executive Chairman, Sven Thieme. The attendees were joyously met with songs from the school choir and after the official ribbon cutting, took a tour around the kindergarten and its facilities.

Schade shared a brief history of the school and expressed his gratitude to all those who worked together and contributed to the development of the school and the kindergarten: “… all these developments here at the Oshinamumwe Combined School would not have been possible without the initiatives of individuals, such as the late Tate Elias Kalola [former teacher and Acting Principal of the Oshinamumwe
Combined School], but also the support of the school board, school management and, in particular, the community… the success of this teamwork is clearly visible in the development of the school over the years.” He added, “… the investment into the [kindergarten] is worthwhile and provides a return to the community and society at large.” Ya Ndakolo shared similar sentiments regarding the investment: “It would not be an overstatement to say that this centre will dramatically improve the lives of the young people of this community. Furthermore, it will be a place where children can come to be shaped, moulded and prepared for their future journey towards growth and development.” He continued, “With this solid foundation I have no doubt the learners of Oshinamumwe Combined School will be able to thrive and to reach their full potential. This is your centre designed to provide early childhood development for the community at large. Let us all work together to protect this excellent infrastructure for future generations.”

According to Thieme, “Education is fundamental to driving positive change and growth, and developing the leaders, innovators and creators the world needs. In accordance with our Purpose, ‘Creating a future, enhancing life’, we believe it is important to invest in the earliest phase of education, because the development of a brighter future starts with early childhood development. Guided by our Vision of ‘being a catalyst for positive change, creating new realities and fulfilling dreams’, we trust this place of learning and play will support these young learners in becoming catalysts of positive change themselves.”