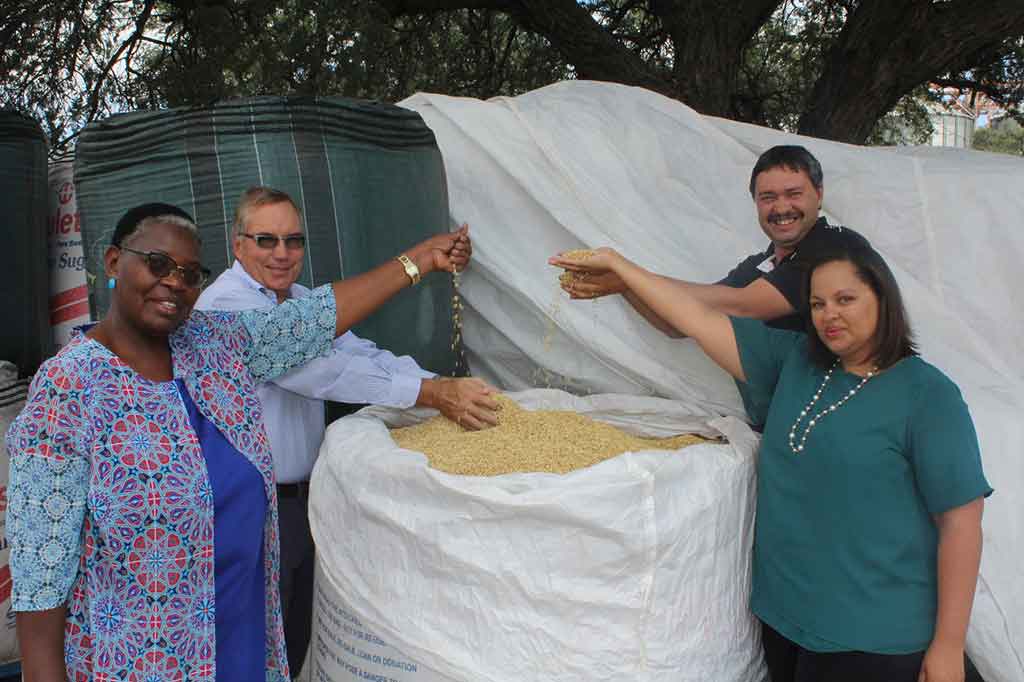 The Ohlthaver & List (O&L) Group last week came on board to support the national ‘Dare to Care Disaster Fund’ aimed at strengthening the abilities of the local agricultural sector, in particular local farmers during the current drought experienced in the country. Through its subsidiary Namibia Breweries Limited (NBL), the O&L Group donated 32 tonnes of locally grown barley to the initiative.

Brought to life by the entire agricultural sector, including the Namibia Agricultural Union (NAU) and the Namibia Emerging Commercial Farmers Union (NECFU), the ‘Dare to Care Disaster Fund’ aims to subsidize drought-stricken farmers (communal, emerging commercial and commercial), with the implementation of the subsidies scheduled to kick off on Monday, 01 April 2019.

At the handing over of the O&L contribution, Dr NAC Nghifindaka from the NECFU said the ‘Dare to Care’ fundraising action is based on three pillars, namely: a marketing action to collect funds with a target of N$10 million by the end of March; complete transparency in the management of the fund where SGA Auditors have been appointed to do a full audit, and the implementation of the subsidy on feed for drought aid. Nghifindaka: “The most important principle for the third leg is that the fund will not give any donations, but will subsidize certain animal feed. The subsidies will be available to all farmers, including communal, emerging commercial and commercial throughout the country where approved retail feed suppliers are available.”

Francois Jacobs, NBL Manager: Source and Inventory said this contribution by NBL and the O&L Group at large is reflective of the group’s dedication to, and passion for its purpose of ‘Creating a future, enhancing life’.  Jacobs: “It is simply an honour and a privilege to be able to contribute to the upliftment of the local agricultural sector of Namibia – a critical leg of the Namibian economy. The drought has clearly made its mark and continues to impact the flow of the local economy. We can only hope and trust that this humble donation will go a long way in support of the Namibian economy. That it will inspire others to come together in solidarity in these trying times, and together make a difference where we can. We truly hope that this gesture will contribute to creating better days for the local agricultural sector.”

Nghifindaka stressed that local farmers are in need of all the help they can get. “We are extremely grateful for NBL and the O&L Group at large for this contribution which will make a big difference, and will go a long way in the life of local farming. We encourage other corporates to follow suit and contribute to making a difference in the Namibian farming and agricultural sector during these trying times.”

According to the fund, four (4) production lines will be subsidized, which include whole yellow maize; sheep fattening pellets; cattle fattening feed, and lucerne pellets. Any feed supply company interested in being part of the action, will have to make a contribution to the fund before their products qualify for subsidy. Any retail feed supplier which has registered for the past six (6) months at participating feed companies will qualify to provide subsidized animal feed lines if such retailers contribute financially to the ‘Dare to Care Fund’.