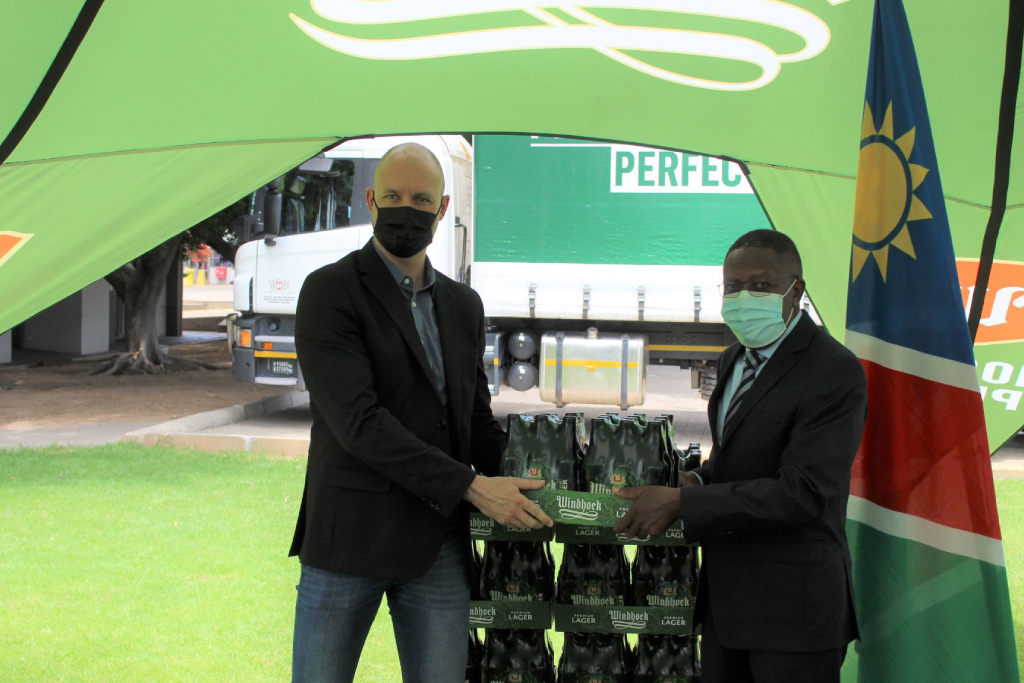 On 1 March 2022, Namibia Breweries Limited (NBL), a subsidiary of the Ohlthaver & List (O&L) Group, proudly shared a consignment of its beer brand, Windhoek Lager, with the Ministry of International Relations and Cooperation (MIRCO) which is to be sent to Namibian diplomatic missions and embassies to mark Namibia’s 32nd Independence Anniversary. The consignment, which consists of 340 cases of Windhoek Lager valued at N$95 200, will go to 34 Namibian diplomatic missions internationally.

Speaking on behalf of Honourable Netumbo Nandi-Ndaitwah, Deputy Prime Minister and Minister of International Relations and Cooperation, at the event was Penda Naanda, Executive Director of MIRCO: “The donated consignment is amongst others meant to promote the product worldwide in order to attract Foreign Direct Investment, adding to our efforts of attracting investment to our country through economic diplomacy.

“Allow me to congratulate NBL for the mark they have secured in the world, and for promoting the country so widely on the globe. The work of NBL speaks of their commitment to encouraging responsible drinking, environmental preservation, health and education as key drivers of their Corporate Social Responsibility within our communities.”

According to NBL Managing Director (MD), Marco Wenk: “As we approach our 32nd Independence Day in Namibia, NBL is proud to add to the festivities for another year by sharing our distinctly Namibian brand, Windhoek Lager, with our Namibian diplomatic missions and embassies around the world. These consignments go out as a taste and symbol of home and a gesture of gratitude to our missions for representing our country and her people abroad; advancing Namibia beyond her boundaries; and promoting all that Namibia has to share with the world.

“True to our O&L Group Vision, ‘To be a catalyst for positive change, creating new realities and fulfilling dreams’, we continuously strive to create opportunities and new realities for our country. As a Namibian company with a 100-year legacy in the country, NBL remains committed to the country and her people who made all those years possible.”